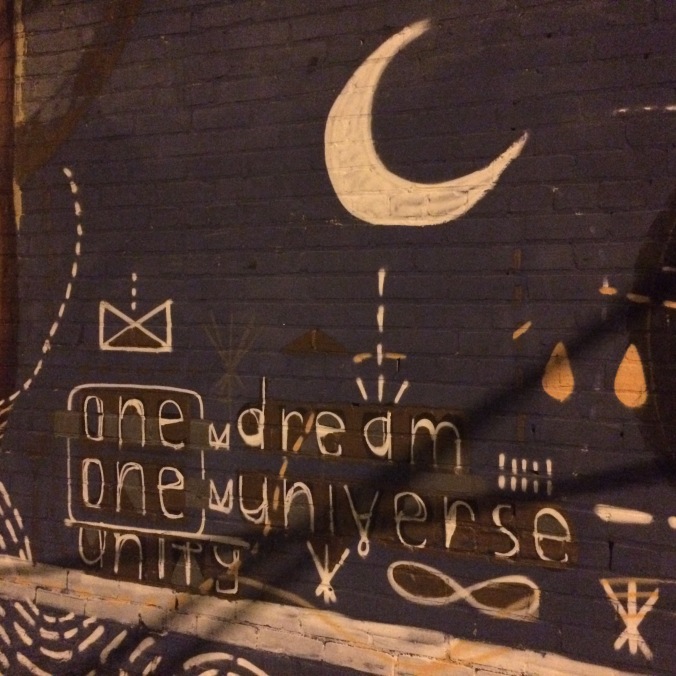 I had the most amazing dream this morning between 6:32 and 7:00 a.m. I won’t describe the vivid convoluted details; I know how boring it is to listen to the play-by-play of another person’s dream. Plus, after a few minutes of trying to hold on to the feeling it left me and capture the details on paper, it started to fade even for me. But I was left with this:

A woman in her twenties or thirties or forties. From a country with an oppressive fundamentalist government, one where women’s voices are silenced through violence. She is rebellious. She is a threat to them and wanted by them and she lives in hiding, somewhere in another country where she can be more free, or sometimes underground in her own country. She is followed the world over by fans and friends via social media. She creates videos that celebrate women’s voices, men’s voices, freedom and sexuality. People support and celebrate her courage by sharing their own videos, speaking out about things that are taboo, things that bring up fear, things that keep us down. I get lost down the rabbit hole of her social media universe, read her words, watch her videos and those of others who are drawn to connect with her. I follow the connections all over the internet and the world, realizing that there are so many people out there who are listening and sharing what she has to say. Social media is so powerful it cannot be silenced by governments. Her statement is about rebellion, but not mindless rebellion without a cause – rebellion that is about celebration. Celebrating freedom of expression and existence and diversity and sexuality. Celebrating the power of connection and love.

Once the house is quiet after the kids and the husband are off to school and work, I sit at the computer with my tea and let myself noodle around on the mothership (my laptop) around the universe (the internet) for a while as I wake up. Sometimes it’s boring – you know those days when your email inbox and your Facebook feed are just REPETITIVE and DULL. Other days, like this morning, I stumble onto some gems, the kind that launch a thousand thoughts and stories of my own.

A courageous young woman telling her very real story about the ways she has been degraded, threatened, controlled, and violated by boys and by men. I read her story and remember the two boys in first grade who would run up and kiss my cheeks as I waited to go back to class from recess, how I dreaded ending up at the end of the line, their easy target, and how their unwanted kisses would make me cry. We all have those stories. I won’t rewrite her post with my own stories, but I could. I’m pretty sure every woman I know could.

I think about my adolescent daughter and all I want her to know and believe and trust about how amazing she is. I think about what stories I will tell her that I have lived, what the lessons are that I want to teach her about what it means to be female. I want her to know how to exist proudly and safely in the world as a woman, how to hold on to that incredible wealth of confidence she has always had as a girl. I want her to always allow herself to shine her bright light – powerfully – in the world. I want her to trust herself. The mama bear in me wants to shout out to her from the rooftops: Don’t ever let anyone push you down!

Then I find the video below. Another courageous young woman says everything that needs to be said about our allowing ourselves to be BIG in a culture that wants us to keep ourselves small. (Take the three and a half minutes to listen to her poetry, it’s worth it.)

It’s as if the protagonist came out of my dream this morning, and she’s really really real, because she is actually every woman. Every human. She is me. She is my children. She is every human drawn to connect, to share stories, to speak out. Drawn to rebel and to celebrate. I swear she’s out there somewhere. So many versions of her.