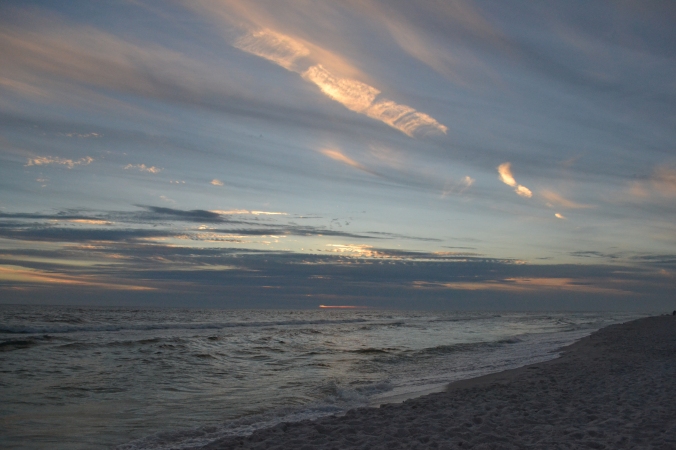 I washed my hands in the restroom of a doctors’ office the other day and smelled it instantly. It lingered on my hands even after they were dry. The smell of that particular kind of medical antimicrobial soap, I will know it forever.

In a flash, for a moment, it is 7 years ago and I am back at the big sink outside the NICU, the one whose water flow is controlled by foot pedals. Or the sink inside, right next to my daughter’s tiny bed. The one only nurses are supposed to use, but which they let me use as well. That same soap. That same smell.

For a while it unsettled me to encounter it. Just over a year after my baby died in that hospital, I found myself at the sink in the bathroom of another children’s hospital in a city 2500 miles away. I had just interviewed for a job managing a research project in their NICU, and before returning to my car in the parking garage, there I was washing my hands and that smell… I almost collapsed as I watched the tears flow down my face in my reflection. In a daze I found my car, and I sat privately and cried, doubting that I was ready to be working in such a hauntingly familiar environment. Wondering if my desire to create meaning from the loss of my baby girl would be overpowered by the raw emotion of having so recently lost her. I didn’t get the job, and perhaps it was for the best. I would have been so good at it though. Good for the right reasons.

Then one day that same smell surprised me – in the moment that it went from being unsettling to comforting. It was February 2011 and I had come to the hospital to deliver the twins who had stopped growing mid-pregnancy inside me. They gave me – the grieving-mother-to-be – the largest room, the nicest room, and also the room furthest away from the other mothers (those giving birth to living children) in Labor & Delivery. I went to wash my hands at the big hospital sink and there it was… that smell. With tears in my eyes I said to my husband, “It’s the same soap.” And I just stood there and smelled it. I washed my hands at that sink many times that night, and the smell remained the strangest kind of comfort throughout.

The smell doesn’t haunt me now. Whenever I am in a medical office, I smell the soap to see if it is the same one. When I encounter it, I take the time to smell it, and I travel back for a moment and return to a time and place where my daughter is still alive. Where the possibility of her survival still exists. Where my entire purpose each day after washing my hands up to the elbows is to sit by her side and love her.

I keep my baby daughter’s things in a wooden chest in our home. It’s amazing what accumulates from such a short life. Not just things she touched but things that came afterwards. Like the little shrine I made in her memory for Dia de los Muertos that first fall, with three friends who had also lost their babies. Like pictures her sister drew as she navigated her own grief. Like the shirt I wore at Tikva’s blessing way when I was still pregnant, the sweater that kept me warm throughout the second half of my pregnancy, and the nightgown I wore when I delivered her.

The tiny blanket that lay over her during those weeks is in a jar, along with the hat that covered her head when we took her outside to breathe her final breaths. The stuffed lamb and the stuffed duck that lay against her fragile body are in another jar. I open those jars sometimes and take a deep inhale. The smell is the same, a little musty but so familiar. Perhaps it’s not exactly her smell, and whatever it is has replaced the familiar in my memory because I would open those jars to smell it so frequently in the months immediately after she died. Like the soap, it brings me a tiny bit closer across the divide between the living and the dead.

It’s been more than 7 years since she lived and died. That’s a long time. And yet there have been times during those years when her loss feels especially present. There is no rhyme or reason to why and when that happens, it usually catches me by surprise. The loss of her is very present for me right now. It’s not a stabbing pain, more like a dull gnawing to remind me. I said to my older daughter the other day, “What do you think life would be like right now if Tikva had lived?” She replied that we probably wouldn’t have my son, her brother. She’s right. We always wanted two children and Tikva would have been the second. So this little being who came and went so fast and will forever remain a baby, she will eventually come to represent something to the little boy who came afterwards, her brother.

After Tikva died, on one of the nights of our shiva, as friends and family filled our home with love and food to share in our mourning, three amazing women came through our door. Two of them had been the midwives we’d worked with during my first pregnancy with my older daughter, and it had been years since we’d seen each other. The third was an acquaintance from many years before whom I’d gotten reacquainted with when I donated some of my breast milk for her baby. I had freezers filled with my pumped milk from the two months of Tikva’s life, more milk than she was able to drink through her feeding tube, and I wanted it to go to babies who needed it. This woman who came to our shiva with our midwives was one of them. It’s hard to explain the connection you have with someone who was able to nourish her baby with the milk you pumped for your own baby who is no longer living.

She walked into our home carrying a basket of warm muffins wrapped in a beautiful napkin, and I hugged her with tears in my eyes. She did not take her basket and napkin with her when she left, and they have followed us in the 7 years since. This little basket that is perfect for small corn tortillas, and this beautiful single cloth napkin.

And you know what? It is my son’s favorite napkin. He calls it “My Napkin” and it is the only one he will use, even when it is filthy and needs washing. He throws a fit if anyone else picks it up.

And I love that. I love how it is all connected – this baby who came and went too fast, this mother I reconnected with whose baby drank my milk, this napkin that has followed us from that time and which didn’t end up in the trunk of Tikva’s things, but instead fell into the hands of my son, the one who came into our lives as the culmination of everything that began when Tikva left us.

The connection between them all is love. It’s that same connection I feel when I smell that hospital soap. It’s in the musty smell inside the jars in Tikva’s trunk. It’s the connection to love – my love, the ones I love, the love from others. The smell and the feel of love.

One thought on “how love smells”